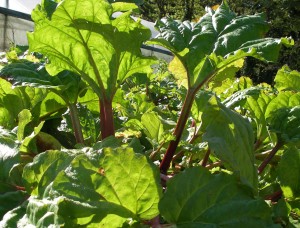 Put an ovenproof non-stick frying pan on a medium heat. When hot, pour in the sugar and as it caramelises swirl it around for even colouration, adding the star anise and zest. When you see the caramel turning reddish take it off the heat and let it solidify. Set the oven to 200°C/400°F/Gas 7.

Lay the rhubarb down, covering the bottom of the pan, squeezing in as much in as you can. If you head for a union flag formation, trimming the flat ends into points so they sit closer it works well. Roll out the pastry just larger than the size of the pan, about 0.5cm thick. Lay it over the rhubarb, to come up the sides of the pan by about 1cm all round.

Sit the pan on a low heat to warm and melt the caramel, then bake in the oven for about 30 minutes until the top is browning and puffed up. Loosen all the way round with a palette knife. Put a serving plate on top of the pan and, holding on to it with oven gloves, flip it over. Give it a few thwacks with a spoon to make sure it is free, and lift off the pan to reveal the magic.
Serve with good with vanilla ice cream.

Recipe by Allegra McEvedy from the Guardian